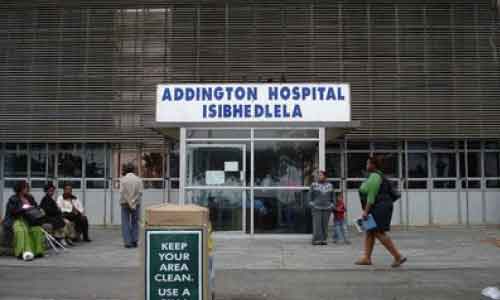 After many years of uncertainty and staff shortages, Addington Hospital has decided to approach the community for help. A committee comprising of Hospital management and the public that use the Hospital facilities on a regular basis, is being constituted to deal with these problems. Poor staff attitude is also adding to service delivery problems and these will also be addressed by the Committee.

Addington Hospital faced closure in 2010 due to staff shortages. The Hospital services patients from a wide geographical area of Durban. It is a 571 bedded and 2 200 staffed district and regional hospital, situated on South Beach, Durban. A vast array of services is offered and it has a Primary Health Care Clinic as well which is named the ‘Gateway Clinic.’ Primary health care is offered at this Clinic at no charge. Patients are referred to the ‘Polyclinic’ should they need care that the ‘Gateway Clinic cannot handle. The Polyclinic handles more complicated cases and a fee is levied according to the patient’s means. Referrals are made to other specialist facilities which Addington can’t handle.

The Children’s Hospital which is situated separately from the main hospital was closed in 1984 due to racial tensions when it was opened to all races for the first time. It was rebuilt in 2010 and is now reopened.

Doctors and nurses are drawn from other health facilities when the staff at the Hospital is stretched to the maximum. Staff absenteeism due to illness and leave, strain the existing system. The patient attendance is very high at all of its facilities and drawing temporary staff from other facilities is not an ideal solution as permanent positions need to be filled. The vacancies are not filled due to poor consultation between Addington Hospital and the KwaZulu-Natal Provincial Health Department and management apathy. Staff from other Provincial health facilities are used to fill in when there are staff shortages.

Patients are often turned away from the Casualty Section and Gateway Clinic. Waiting times of twelve hours are common in the Casualty Ward. There are gaps in the service delivery.

Due to the pressure of being short staffed, it is common to find that blood results for example lie unattended until the patient asks. Patient files are not read properly by the attending doctor and unnecessary questions are asked of the patients which are already

recorded in the patient’s files due to staff attitude. Staff do not read the consultation history on file which places a burden on the patients having to remember their past consultations or carry their medication.

Patients at ‘Gateway Clinic’ are often turned away at closing time of 16:00 as they have not been attended to during the Clinic operating hours. They have to come back the next day and there is no guarantee that they would be attended to. They are sometimes referred to the Casualty Section and due to the high volumes at that Section, the waiting period becomes extended and unbearable.

The Pharmacy division of the AIDS and general dispensary have interns that are not properly supervised and the scripts are often not found in the files. The interns have no knowledge how to search or where to send patients back to the attending doctor and this causes enormous frustrations to patients due to time wastage. Due to the high number of patients, the qualified pharmacists often overlook the prescriptions that are not filed properly in patient files.

Complaints are not dealt with adequately by staff. There appears to be a vindictive approach by staff when concerns are raised by patients. There have been reports of patients being left unattended to after requesting use of bedpans.

The staff do not process the patients quickly for registration and also for the collection of files after registration as they waste time in processing file requests and ignore patient verbal enquiries. Many patients spend the better part of the day looking for their files after departments send them to other departments and the patients leave the Hospital through sheer frustration.

Appointments are made with certain specialists within the hospital by doctors within the Hospital and when patients keep the appointments, the specialist department has no clue as to what the referral is about. The receptionists at the departments do not offer any assistance and responsibility is put back to the patient and not on the medical staff.

The ‘suggestion boxes’ that are provided in certain areas of the Hospital and Clinics seem to be a waste of time as these are not followed up. Complaints are referred to the P.R.O. department which does not have the authority and accountability to make meaningful decisions. The Hospital Manager and Senior Management are not readily available to deal with complaints.

These accumulated problems have been left for far too long which is causing frustrations to the very people the Hospital is supposed to be serving and has also given it a tarnished image. The ‘operation’ is long overdue and it is hoped that service delivery will improve with the correct number and calibre of staff.

Sister Bhengu is spearheading the drive to set up the committee. She is in charge of ‘Gateway’ and the ‘Polyclinic.’