KEPT IN THE DARK 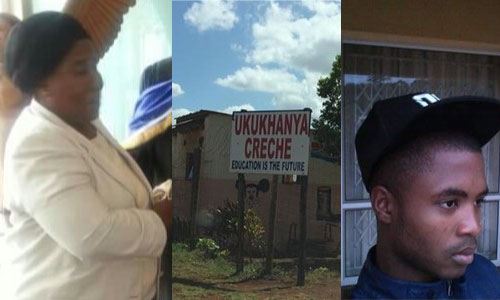 by Nobuhle Sithole – For many years Mkhazini, a rural area between the outskirts of Folweni and KwaMakhutha Townships in KwaZulu Natal South Coast, has been faced with a lot of hardships and challenges.

There has been no crèche facility, no school, no community hall nor playground in the area, only poorly constructed roads and dusty poverty stricken homesteads. As a result, the area seemed to be left behind. Ukukhanya koMkhazi Creche, per its registration certificate, became a glimmer of hope for many in the community. It was approved by the Independent Electoral Commission (IEC) as a voting station just before the 3 August 2016 elections and later for other community based projects such as a crèche facility. Ukukhanya koMkhazi Creche is the work of dedicated community members led by the South African Communist Party (SACP) branch in the area.

Ukukhanya koMkhazi would have remained a dream for the community members. But the kind giving heart of Gogo Bavelile Khuzwayo(76), a senior citizen in the area, made it all possible. The uncompromising ward counsellor at that time Mr. Thami Cele would not work together with the committee organising the centre. According to rumours, he would rather work with people close to his own house because he knows they have and will continue to support him and his political ambitions. Mxolisi Meyiwa, one of the crèche’s founding members, and also a staunch SACP member was quoted saying angrily: “I don’t understand what is wrong with Mr. Cele, I think he has some personal issues with us. He could not provide us with the resources and not even the information that we needed.”

Gogo Khuzwayo, who has lived in Mkhazini her entire life, knows the struggles of this area too well, which is why she donated a piece of her own land for the centre to be built on. “We use to walk far distances on barefoot just to get to school in the township,” cried the old and frail gogo. Traditional leaders in the name of Baba Sbonda Khuzwayo were notified and they approved the handover of the land for community use, and a temporary title deed was issued in the name of Ukukhanya koMkhazi Creche.

A donation of R100 per working household or R50 for pensioners and grant beneficiaries was collected from the members of the community. All this money bought building materials and food for the dedicated labourers who were community volunteers – they worked tirelessly without pay. “I feel so honoured to be working for something that will bring change and development for my community, as one of many unemployed youth of this community I hope that one day this centre will bring us jobs and other development opportunities,” said Mbongeni Dladla a labourer at the site. Mr Ngcobo, a local businessman, also donated 2 hours service of a tractor to open the building site. Ukukhanya koMkhazi is now a registered crèche and voting station. It is also on the map GPS. Although there is still a long way to go before this site is recognised as a safe and secured place for keeping children, the citizens are beaming with pride for what they have done for themselves and the future generations of this area. It proves the Zulu idiom that says “Siyonqoba Simunye,” loosely translated “Together we conquer.” The people of Mkhazini conquered against all odds.