CHANGING OUR COUNTRY ONE CONVERSATION AT A TIME

AN UNFOLDING NARRATIVE OF COLLABORATION AND ACCOUNTABILITY AMONG CIVIL SOCIETY ORGANISATIONS 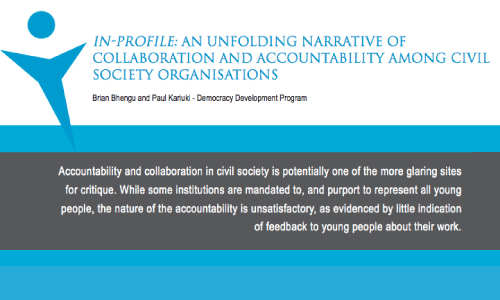 Accountability and collaboration in the civil society is potentially one of the more glaring cites for critique. Whilst people, and activists are impassioned by developmental needs in their communities, they are often not aware of or unwilling to engage current formations and groups with an aim to improve them by holding them accountable for their actions and commitments; they are more likely to establish their own organisations and attempt to advance their goal as an individual effort rather than collaborate and deepen impact of their interventions. More concerning, is the trend that even established organisations hardly venture into partnerships with one another. The justification relied upon is two-fold; first, is a question of values, and secondly one of resources. Values underpinning an organisation’s work and governance are sometimes to the exclusion of other modes and practices of other organisation.

Whilst the issues confronting government in their engagement with young people are not limited or specific to any demographic, there does seem to be a perception that being accountable is not a priority. For instance, institutions such as the National Youth Development Agency (NYDA) and the South African Youth Council (SAYC), it is notable that whilst these organisations are mandated to, and purport to represent all young people, the nature of the accountable is unsatisfactory, evidenced by little evidence of feedback to young people about their work. This article discusses the DDP Youth Desk to exemplify the concepts of accountability and collaboration.

It was the feeling of DDP that, whilst youth may not be pursued as a core ‘stand-alone’ project, it is worthwhile investing time and energy into ensuring that the youth demographic is consciously kept within the DDP’s field of influence through its recognition within our community of practice. This was undertaken through investing time in investigating and connecting with the needs of youth formations in the communities in which we have the strongest presence. This assisted in finding capable youth organisations, and investigating what capacity gaps they had and how DDP can assist in building the relevant capacity. Further, DDP moved from being the direct implementing body of youth-related projects and would rather act as mentor to younger organisations whose core work is youth work and accompanying them.

The way in which DDP went about its intervention in 2016 was the steady recruitment of youth-based and youth-led organisations. The notions of accountability and collaboration underpinned the intervention right from the onset and have continued all along to date.

Re-Thinking Collaboration: Realities of Working together as Partners

Central to the success of the various partnerships was both the formal and informal opportunities for engagement that were made available; which included allocated time for networking and reflection on work done.

The focus on building the capacity of youth organisations, and not being direct implementers of projects in community seems to have worked well for the limited staffing at DDP. Given the nature of DDP’s oversight and accompanying role, younger and newer organisations were given an opportunity to thrive in the work that they can do in community, with the opportunity to be able to seek logistic and design assistance from DDP when they were unable to complete a planned action for whatever circumstance. In this way, accountability was enforced as agreements were kept by all partners and monitored through continuous engagements.

An emerging mode of intervention

It is important that when interacting with new/potential partner, there is a deliberate attempt to create an environment of trust through:

This is more than just about saying who you are, why you’re there, and where you come from as an organisation; it also relates to the individual stories of the people at the face of the intervention. Knowing, or at the very least, feeling like you know the person’s motivations and intentions creates a situation of less resistance.

Having an organizational culture that emphasises accountability through mechanism and policy that show clear lines of communication, responsibility and decision-making is likely to ease the anxiety of new partners and collaborators. There needs to be adherence to a set of consequences when responsibility is flouted. This way, accountability amongst collaborators is enforced and respected.

As a developing community of practice, significant time needs to be built in and encouraged as part of the design of the intervention, that will allow reflection about the nature of the unfolding intervention. This reflection doesn’t stop at just looking at the potential indicators as part of the monitoring and evaluation plan, but also looks distinctly at the way the working relationship between the partner organisations is going.

Some of the issues that are often unique to working with youth organisations (especially at community level, present themselves only as the intervention unfolds- it is difficult to plan for, except to say that there needs to be a degree of time invested into incorporating buffers into the implementation timelines and so forth.

Some of the challenges include:

The following are some of the lessons that are unfolding as the intervention continues:

E. Building on shared values to ensure long-term commitment to process and change

Building on shared values to ensure long term commitment is a process and happens over time through increased interaction and information exchange as trust is built among partners. As partners identify with the values that bind them together in a network, the more they become amenable to the partnership. Shared values have in them inherent benefits that promote collaboration and accountability among partners in a network such as:

The DDP is persuaded that in enhancing youth development in the context of building engagement in communities, there is a need to think about new modes of collaboration that strengthen partnerships and promote accountability. This is a desirable approach recommended for civil society organisations seeking to deepen the impact of their interventions towards sustainable community development.