AN UNFOLDING NARRATIVE OF COLLABORATION AND ACCOUNTABILITY AMONG CIVIL SOCIETY ORGANISATIONS

CHANGING OUR COUNTRY ONE CONVERSATION AT A TIME 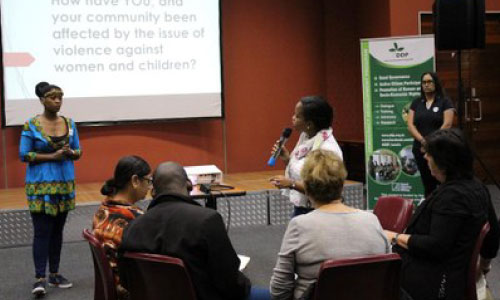 By Nonkululeko Hlongwane – It’s quite interesting how everyone, especially Community developers, spend their days talking about change without an understanding of what it means to communicate. This was also an error I suffered from prior to attending the “Connecting Communities” workshop run by Dr Rama. The biggest misconception about communicating in general is that all it requires is the ability for you to articulate yourself very well. When you’re pitching a business idea this works very well however when your engaging a group of people about real life issues with the hope of being able to plant a seed of change, this wouldn’t be very ideal.

A number of lessons stuck out for me during the workshop such as the importance of transparency and equal power, the art of listening and asking questions but most importantly I learnt the power of  allowing people to arrive at their own solutions without imposing them. The 2 and a half days was a major test for me as I specialise in delivering trainings which generally require me to prepare content to deliver. It’s not as engaging as dialogues are. However I’ve been wondering on how workshops and trainings would look like if they were delivered using the art of conversation techniques. How a workshop looking at digital active citizenship would be laid out and how effective it would be. With all these learnings one generally has to put it play in order to get better at having open, honest conversations. The true test is being able put theory in practice and watch the learnings unfold.

For me this opportunity came quicker than expected when I was asked to host a Civil Society Engagement on the Violence against women and children. Not having hosted a workshop before in my life but having attended many, I worried about a number of factors. Will I be able to shut up and listen? Will I be boring? Will the participants be encouraged beyond the conversation? Will I get the art of conversation terribly wrong?

You see these thoughts were the least of my problems. On the morning of the dialogue the participants started walking in, a rather “mature” group of individuals, more mature than the crowd I’m use to facilitating to. Automatically I started thinking of all the possible sicknesses I could make up on the spot to get out of doing the dialogue. Quite frankly I was wasting my own time, there was no getting out of it. As the room filled up I saw people who had probably run their organisations for years and years and here I was about to make them guinea pigs of my new found information.

I opened up with a joke and by no means was it to make them feel welcome but rather for me to laugh and actually get some oxygen to my heart J The day went by, we went in and out of group discussion in very intimate smaller circles. A dissent came up in the room which almost saw the women get up with their pitch folks but instead the dissent was amplified and spoken about. I had people coming up to during tea and commending me on how the dialogue was done and how great I am. This gave me the right amount of confidence to soldier through. We concluded the dialogue and seemingly by the smiles in the room. Everybody was pleased with the amount of work done.

We take the simplest things for granted, such as talking and listening and for me the most important thing I took away from facilitating was that we mustn’t over complicate things, the content is useless if the process is not right. I took away a new found respect for communication as a whole but most importantly I walked away and was thankful for all the gifts I received. I’m grateful for DDP creating both those spaces for me to further grow and I look forward to the many more lessons I am yet to learn and teach.