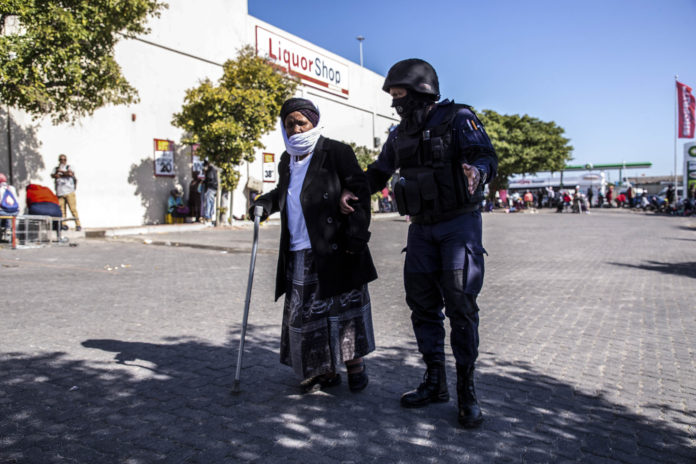 CAPE TOWN, SOUTH AFRICA - MAY 04: A general view of elderly people waiting in line for their SASSA payouts at Makhaza Mall in Khayelitsha in the Western Cape Province of Level 4 of the National Lockdown on May 04, 2020 in Cape Town, South Africa. (Photo by Gallo Images/Roger Sedres)

The harsh reality of these unusual pandemic times has necessitated a rethink about our politics, our values, our vision and our social contract with the government and with one another. As socioeconomic pressures increase, the more citizens grapple with the concept of democracy and its promised fruits.

The pandemic has revealed the deep fractures that have defined our nation since independence. These are deepening as the nation grapples with the adverse effects of a contracted economy, characterised by business closures, increasing unemployment and escalating costs of living. In its attempt to limit the transmission of Covid-19 across the country, the government has instituted lockdowns, which include curfews and bans, in an attempt to curb its spread and flatten the curve.

In all these unusual occurrences, there are important lessons that we have learnt as citizens and as a nation. What have we learnt thus far?

First, an effective state that delivers on its social contract with its citizens is imperative and not a luxury. The auditor general’s report, which exposed the extent of inefficiencies and malfeasance in municipalities in the last financial year, points to the need for an effective state at all levels of governance and especially at the local level. The loss of billions of public resources only serves to exacerbate the present situation in the country. The public expects quality public services that are delivered, efficiently, effectively and equitably to all citizens. This is important in building trust in the public towards easing their anxiety as they embrace the coming tough times ahead.

Second, Covid-19 has shown that ability to protect citizens from a pandemic does not necessarily depend on wealth: some wealthy countries have battled to contain the virus while a few resource-constrained countries have succeeded, especially in Africa and Asia. According to Steven Friedman, the director of the Centre for the Study of Democracy at the University of Johannesburg, health systems in wealthy countries are built on curative health care. He argues that these countries are not “necessarily equipped for effective preventative medicine, which tries to ensure that people do not fall ill in the first place”. Although both branches of medical science are important and not mutually exclusive, there is a need to invest significantly in preventative medicine because it empowers citizens to work together with the government at various levels to mitigate the spread of the disease.

Third, we need evidence-based policing as a paradigm where security forces are constantly thinking about their actions and making decisions to inform their actions to avoid infringing human rights and other civil liberties enshrined in the Constitution. This paradigm shift is important because it relies on tested evidence that security agencies are effective in enforcing regulations in public health emergencies. Moreover, enforcing lockdowns, curfews and bans using police and the military interventions should be in the best interests of citizens, protecting them and not injuring or even killing them. Loopholes and deficiencies in legislation dealing with how society is police must be addressed as a matter of urgency. This should be supported by intensive training in civic education, human rights, conflict management and prevention.

Fourth, prioritise establishing a capable, professional and politically neutral civil service, whose loyalty is offering the best possible public service to citizens. This establishment will go a long way in addressing the problem of corruption and poor performance caused by perceived weak technical and human resource capacities available to municipalities and eventually replace cadre deployment, which has become synonymous with appointments in the public sector.

Fifth, prioritise effective public resources use through cost-containment. The treasury recently published its much-anticipated municipal cost containment regulations effective from July 1. These new regulations aim to ensure that municipal resources are used effectively, efficiently and economically and will apply to all officials and political office bearers, addressing the disheartening excesses that have been observed at the local government level. But, for these regulations to be effective, they will have to overcome a long-entrenched political and institutional culture of entitlement and abuse. The treasury must have the will and the tools to enforce cost-containment.

Sixth, value citizens’ participation in governance matters. This is a type of leadership that puts the interests of citizens first and citizens are empowered to exercise their democratic voice and responsibility in holding their leaders accountable.

Citizens lack real influence in governance processes. To strengthen public participation in managing the pandemic, citizens must be at the centre of every government intervention including in the management of the pandemic. They are an asset to the nation, not a problem. A genuine partnership between the government and citizens is needed now more than ever.

Paul Kariuki is the executive director of the Democracy Development Programme in Durban. He writes in his personal capacity

This article is available on the Mail and Guardian