Empowering women towards an equitable future in the Covid-19 era

The release of the recent Afrobarometer survey results examining trust in South Africa’s institutions and political parties reinforces perceptions by the public that our body politic is in a state of chronic crisis. For the longest time, the sense one got as citizens navigated their daily survival was that the South African people have been left to their own devices to define their existence while being asked to support a state apparatus that at times have essentially abandoned its citizenry. Not only does the survey affirm that the fate of our democracy is in a parlous context, but it also raises the quintessential issues of how sustainable and what is the value addition of the country’s opposition party politics.

It is often said that in a democracy the competitiveness and vibrancy of the opposition party and their politics is a significant driver in keeping the incumbent party on their toes as well as offering an alternative choice at the polls. While recognizing that opposition spaces can be complex and overcrowded, as in the case of South Africa, they, nevertheless, provide an opportunity for the electorate too, at least, feel that there is an optimism that the democratic dividend is worth engaging in and does take into consideration the voters’ interests and needs. In fact, the viability of a democracy rests on the attractiveness that opposition politics radiates.

However, the findings from the latest  Afrobarometer survey, highlights that even in the realm of opposition politics and spaces, the hope and trust among the electorate is dim and lacks the effervescence to draw on the hearts and minds of the South African public. While most of the debates and narratives are preoccupied with the unravelling of the ruling party, the African Nation Congress (ANC), the fact of the matter is that ordinary South Africans are equally dismayed by all political parties across the spectrum. This is revealing and must be interrogated further to disaggregate why this is the case.

We did not need a survey to confirm our perceptions that the overall trust deficit in the political architecture and actors in the state system had deepened in the past decade. In fact from daily conversations, it is predictable to gauge the intense frustrations people feel towards the government and institutions of the state. The most common response is: what will my vote change?

More often than not the anger and dissatisfaction of ordinary people are aimed at the party in power and their inability to deal with the governance crises. The annoyance by the general public is borne out of the prevailing view that those in power are more concerned about their own lives, livelihoods, and power and have little regard for those who have voted for them into office.  In fact, it is the lack of accountability and arrogance that underpins perceptions that there is scant regard for the poor, vulnerability, and marginalization while those who hideously claim to represent the electorate have broadly epitomised Michael Wrong’s famous book “It’s Our Turn to Eat”.

In a sobering sense the aforementioned survey reveals that it does not matter whether one is in the ruling party or outside of its ranks, the reality is that political parties have systemically moved away from their voting base. The striking takeaway from the survey is that both the ruling party and the opposition are moving closer together when it comes to issues of mistrust or a lack of confidence. As the graph below shows the trust element among opposition parties has never been higher than 40%. 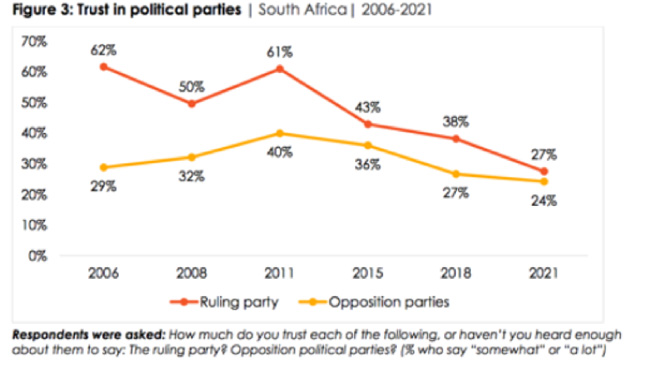 Equally important to disaggregate from the figure above is that even where the ruling party has been going through a fundamental internal crisis and is in an existential decline, opposition parties have never really been able to represent a shift away from the ANC for the electorate. The critical question is: why is this so? Perhaps a plausible explanation is that opposition parties appear more focused on trying to discredit the ANC and relying on the party’s weakness rather than aiming to present themselves as viable alternatives.

Finally, the trust deficit between the ANC and opposition parties raises another interpretation that could be construed as challenging conventional wisdom. It would appear that opposition parties have not been able to increase their trust footprint in relation to the ruling party. Whereas trust in the ANC had started to show a considerable decline from 2015.

Since 2006 perceptions of trust in opposition parties flowed from 29% to a peak of 40% in 2011 and then a decline of 24% in 2021.  In the same period the ANC recorded its highest peak of 62% in 2006 with a steep shift to 50% in 2008, then a positive increase to 61% in 2011 followed by a dramatic decline to 43% and 27% in 2015 and 2021 respectively.  It is probably important to highlight that the swings in the overall percentage differentials relating to the trust dividend in opposition parties have been less than 5% over a 15 year period, while for the ANC the fluctuations have been closer to wider margins of between 10% and18% in the same period.

This instructive interpretation of the data illustrates a significant set of issues regarding the nature of the country’s oppositional politics and the environment they occupy. More importantly, it highlights that the established criteria of the role that opposition parties play in consolidating the democratic dividend according to the scholarship is being tested in the South African context. As highlighted in the next section some salient propositions can be made about the quintessential character of the way opposition parties define and align themselves in the body politic of the state.

It is intriguing to gauge how opposition parties almost all have a singular narrative when it comes to the way they contextualise their identity in the electoral landscape of the country, namely a reactionary approach to the ruling party. While it is important to expose the inadequacies of the ANC where the latter has failed to uphold and execute its mandate as a trusted government in power, opposition parties have made this their centrepiece when it comes to electoral politics.

The South African electorate are not clueless about the graft and lack of capacity to lead in the ANC. To be honest ordinary people bear the brunt of an ineffective ruling party. But what opposition parties fail to realise is that voters are not looking to be reminded of how poor and badly the ANC governs. Instead of being told how unscrupulous things are, communities are looking to hear how their lived experiences are going to be improved: What it is that opposition parties are going to do to offer a Better Life? Yet opposition parties seem comfortable to assume that the ANC’s weaknesses will be their gain. A strategy for all intents and purposes has not really materialized.

By provoking a reactive electoral identity, all opposition parties are doing is invoking the misguided notion that trying to persuade the electorate to not vote for the ANC will inadvertently tip the scales in their favour and, therein,  shift the holy grail towards a better life. The notion of a competitive electoral system may be a necessary condition but it has not always been a sufficient condition as demonstrated by voter apathy and unresponsiveness to such an approach.

By employing a reactive electoral identity, election campaigns become predictable and predicated on less of an innovative framing of the election message and more about trying to make inroads into the voting base aligned to two paradoxical notions: 1) sway and capture the majority of voters by appealing to their sense of anger towards the ruling party and 2) scare minority groups into feelings of uneasiness and fears that their rights and existence is under threat in a majoritarian democracy.

It is almost quizzical that opposition parties assume that by adopting a narrow interpretation of what defines the real issues that plaque the electorate can be trivialized by minimalist attempts to shift the electoral playing field. This lack of vision suggests that in as much as the rhetoric may highlight what are the genuine social justice struggles that underpin the socio-economic dilemma of the electorate, it does not portray the real focus that voters are expecting to hear and see, namely, how is your party different from the ruling party and to what extent are your policy programmes and moral leadership really different and pragmatic to what government is doing?

It is probably wise for opposition parties to consider the graph below which speaks volumes to what the electorate is actually looking for. 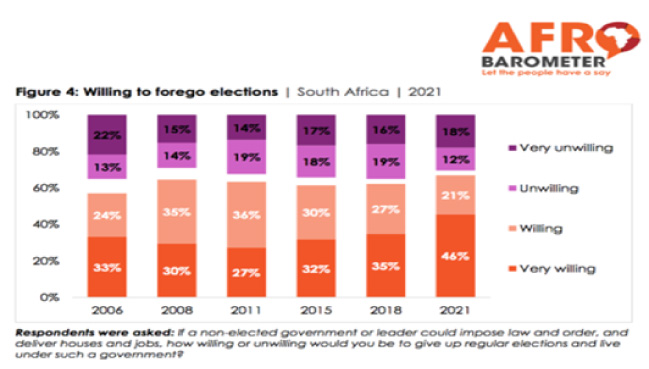 The message is clear and simple: the electorate is looking for guaranteed returns on their vote. They want to know that stability, governance, and access to basic amenities can be provided without having to be underpinned by the politicisation of their socio-economic struggles. The reductionist engagement of trying to appeal to the electorate’s frustrations is a short-term appeasement intervention and does not in reality address the existential nuisances that the opposition suffers as a sustainable and vibrant alternative.

If indeed, citizens are willing to give up their right to vote in exchange for what is duly their rightful return of a decent life, then this democracy is entering not a point of consolidation but rather an age of the maturing citizenry. Opposition parties would do well to glean that rubber politics and theatrics no longer captures the imagination of the electorate. Instead, voters are looking for reasonable and sustainable policy alternatives. More importantly with 46% of respondents are very willing to forego their democratic rights and consider living under ‘a no elected government official or leader’ that provides security, development and overall governance suggests that the electorate is raising a new high in terms of the social contract between themselves and elected officials.

The time has come for opposition parties to look beyond their schoolyard tactics and incorporate new thinking to how they want to fashion their electoral behaviour based on what the electorate is highlighting as warning signals. It is not enough to assume that the public is only pushing back against the ruling party. In fact, if the opposition parties were pragmatic enough they would realise that the South Africa public is becoming increasingly tired of being losers in this democracy and are seriously considering a delegative democracy where a strong state and an even stronger personality can deliver the more viable option of upholding rights, access to services, and entrenched stability.

Ms Sanusha Naidu is a senior research associate based with the Institute for Global Dialogue. The views expressed are personal.