‘We are sleepwalking into a constitutional crisis’

“Overcoming poverty is not a gesture of charity, it is an act of justice.”- Nelson Mandela

Poverty has been Africa’s perennial challenge over time, despite the fact that the continent is blessed with all the wealth-creating resources. The continent is endowed with the richest natural resources such as oil, gold, diamond, land, and a favourable climate, yet the continent is still poor and stagnant when it comes to development. Africa is the world’s poorest continent. Most African citizens and countries live in in abject poverty, despite the fact that most African governments have signed and ratified a number of protocols and agendas that seek to fight and eradicate poverty in Africa. Sustainable development goals, which are global goals set up in 2015 by the United Nations General Assembly and are intended to be achieved by 2030, include the eradication of extreme poverty and African countries are signatories to these goals and have committed to fight hard to achieve them by 2030. This year marks the 35th anniversary of the World Day to Overcome Extreme Poverty and the 30th Anniversary of the international day to eradicate poverty. This is a day which offers a platform to people who are living in poverty and extreme poverty to talk about their lives and their poverty struggles.  While Africa and the World will commemorate this day, it comes under the backdrop of lived poverty being on the rise.

The latest Afrobarometer surveys on poverty indicate that lived poverty in Africa is on the rise with 33 countries’ “severe lived poverty” rate going up to 19% from 17% (Mattes, 2020). Presented with this rise in poverty, there is a need for Africa to address a number of challenges that are hindering the eradication of poverty. These include corruption, poor governance, limited employment opportunities, poor infrastructure, poor resource usage, wars and unending conflicts, and poor World Bank and IMF policies, etc.  With the continent facing a rise in poverty levels, it is imperative that member states, individuals, African Union organs, such as the Pan-African Parliament, play their part in addressing these challenges in order to eradicate poverty in Africa. The Pan-African Parliament, being an important African Union organization, is also strategically positioned to advance policies that can retrieve Africa from the doldrums of poverty. This paper will focus on how the Pan African Parliament can play a key role in pushing national legislatures to support poverty eradication in Africa. Focus will also be placed on the Pan-African Parliament that can use data-based evidence to influence the enactment of legislation and policies that advance the eradication of poverty.

Poverty is a relative concept, and it is interpreted and understood differently by people, organizations, states, government, etc. Defining poverty is a very challenging, as poverty has different meanings attached to it and this affects on its bearing on society. Taking a closer look at the plethora and varied meanings of poverty what is of importance is that, in all the definitions, what is central and mutual is the issue of material inadequacy. Scholars, such as Ramphoma (2014:60), argue that “poverty is more than just having enough income to live by”. This, in essence, means that poverty is a multi-facetted phenomenon which encompasses a number of critical dimensions of living standards, such as income, consumption, health and education, etc. Thus, the direction that public and private initiatives take regarding poverty mitigation, determines how poverty can be defined. There is an understanding that there are varying perceptions on what poverty is and these include;

For the purpose of this paper, Saunders’s (1997) definition of poverty will be used, which is involuntary restrictions on choice, which is based on a particular society or culture.

Causes of Poverty in Africa

Africa, as a continent that boasts of a number of natural resources that are able of extricating it from the shackles of poverty, suffers from an increase in poverty. A number of factors cause poverty in Africa and these factors, according to White and Killick (2001:30), are “causes of poverty in Africa are multi-faceted and include economic, social and political, international and national (macro and micro) factors” (See Table 1). These factors include corruption and poor governance, limited employment opportunities, poor infrastructure, poor resource usage, wars and unending conflicts, and poor World Bank and IMF policies, etc. While the factors are numerous, it should be agreed that the flaws in a number of African states’ political systems and the social forces are significant primary causal factors that are core to the poverty problems that are bedevilling the continent. 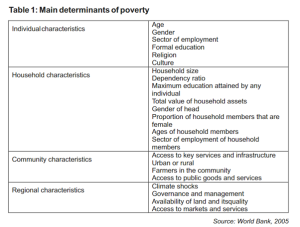 State of Poverty in Africa

Africa is still struggling in dealing with poverty as poverty rates still remain high (See Figure 2). An estimated 40% of people in Africa live below US$1.90 a day (Donnenfeld, 2020). According to the World Bank, Africa is lagging behind the rest of the world. In the Sub-Saharan region, the overall number of people who are extremely poor is increasing, with an estimated 413 million people in Africa reported to be currently living in extreme poverty (DW n.d). Income levels in most African households is dropping. In most African countries, such as Uganda, Malawi, and South Africa, surveys by Afrobarometer indicate that lived poverty is on the rise as more Africans are going without basic necessities (See picture below). 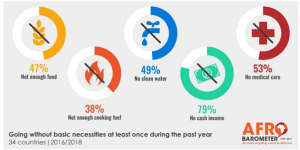 Afrobarometer 2016/2018 indicate that in the 34 countries it surveyed, more than half (53%) of all respondents faced shortages of medicine or medical services at least once in the previous 12 months. 49% are experiencing shortages of clean water, while 47% and 38% of the respondents are reported to be facing food and fuel shortages respectively. 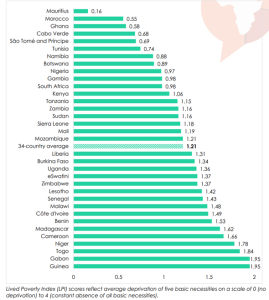 Across Africa, it is clear that poverty is on the rise and what is even more troubling, is the intensity of deprivation. The population in Africa is facing frequent food, water, medical and income shortages which is thereby pushing more and more people into poverty.

What is the Pan-African Parliament?

The following are the functions of PAP:

What role can the Pan-African Parliament play to support poverty eradication in Africa?

The Pan-African Parliament affords the potential to serve as a forum for member states’ consensus on poverty reduction priorities and thus rally continent support and ownership. As a regional oversight body, the Pan-African Parliament is the zenith of accountability hierarchies, as it has the ability to summon organs of the African Union, Regional Economic Communities, Member States and their organs and institutions, when enforcement of accountability is required. In support of poverty eradication, the Pan-African parliament need to play the following roles:

Poverty Diagnosis and Analysis- The Pan-African Parliament, in support of poverty eradication in Africa, can play a role in the diagnosis and analysis of poverty in Africa. Through its field visits, it should be the role of the PAP to ascertain where concentrations of the poor exist within Africa. Furthermore, it is the role of PAP to also contemplate on the regional, occupational, ethnic, and gender characteristics of the poor and to advocate member states to come up with a sufficient pro-poor policy formulation. Subsequently, it is also the role of PAP to work closely with civil society, and national/provincial parliaments to ensure that poverty diagnosis and analysis encompasses participation from throughout the country, region and particularly from the poor, and to advocate for a Pan-African poverty alleviation strategy.

Poverty Policy Priority Decisions- The Pan-African Parliament can also play a role of making sure that, as the legislative arm of the African Union, it is heavily involved in prioritizing policy decisions that are related to poverty alleviation in Africa. It is the prerogative of the PAP to ensure that African people’s voices are heard, particularly those of the poor. Consequently, PAP should facilitate African Civil society participation in the broad African Union, Agenda 2063 poverty alleviation strategies, so as to build social agreement and achieve pro-poor choices.

Advocacy- Another role PAP can play in supporting the eradication of poverty is through popularizing and promoting the policies, objectives and programmes of the Union which are in line with poverty eradication. These include popularising the African Charter on Democracy and Elections (ACDEG) which is a normative instrument that seeks to promote good governance in Africa. PAP can also push for the eradication of poverty in Africa through also advocating for the implementation of AU protocols that focus on poverty alleviation and initiatives, such a silencing the guns, which seek to promote an end to wars in Africa, which are also a cause of poverty on the continent.

Furthermore, some of the poorest countries on the continent really need considerable prolonged aid to fund direct universal welfare benefit systems to help them come out of poverty. The Pan-African Parliament has a role to play in advocating for aid for these countries and to recommend selective import restriction for these countries so as to insulate them until they are strong enough to compete. Engaging with Bretton Wood institutions on this matter is critical for PAP as these organisations are not allowing this to happen.

It can be noted from the above discussion, that Africa is battling with the issue of rising poverty. A number of African countries are in abject poverty; this is according to recent studies done by Afrobarometer. The causes of poverty in Africa are varied and they range from corruption, mismanagement, wars, etc. The paper also touched on the different forms of poverty which include generational poverty, urban poverty, rural poverty, etc. In addressing these different forms of poverty, the paper also analysed the role the Pan-African Parliament can play in supporting poverty reduction. It was discussed that PAP can support poverty reduction through conducting poverty diagnosis and analysis, the promotion of poverty policy priority decisions, encouraging member states to participate in budget cycles and in advocating for member states to implement zero tolerance for corruption, promoting good governance and silencing guns, as these are the root causes of poverty in Africa.

Donnenfeld, Z (2020). What is the future of poverty in Africa? Available at: https://issafrica.org/iss-today/what-is-the-future-of-poverty-in-africa

Jense, E. (2009). Teaching with poverty in mind: what being poor to kids’ brains and what school can do about it. Alexander: Nancy Modrak.