“There should be zero tolerance for any form of violence against women in parliaments. It is the responsibility of our institutions and all parliamentarians, both men and women, to take urgent action to become more gender sensitive.”– Mohamed Ali Houmed (APU president)

The inclusion of women into political positions has been an ongoing battle/process as a number of factors has hindered meaningful participation of women in politics. Across the continent and the world, a number of measures have been put in place by various governments, regional and international bodies to support the involvement and inclusion of women in politics and for them to assume powerful positions. Different measures have been put in place to encourage women to take part in what has been a male dominated sphere (politics). Some of these measures include putting into place legal frameworks which values gender equality and equity in politics. A number of countries in Africa, such as Zimbabwe, Rwanda, South Africa, Zambia, are signatory to the many declarations aimed at increasing women’s leadership and decision-making, e.g., the SADC Protocol on Gender and Development, the 2000 UN Security Council Resolution 1325 on Women, Peace, and Security, AU policy positions on gender equality, etc., which are all geared to facilitate gender mainstreaming. In Zimbabwe, the new Constitution which came into effect in 2013, promotes women’s participation in politics through the quota system which sets sides 60 seats for women for proportional representation in Parliament, increasing the number of women in Parliament from 16% to 34%.

Violence against women is conceptualised by the United Nations Declaration on the Elimination of Violence against Women (1993), as “any act of gender based violence that results in, or is likely to result in, physical, sexual or psychological harm or suffering to women, including threats of such acts, coercion or arbitrary deprivation of liberty, whether occurring in public or in private life.” The violence comes in difference forms which are physical, sexual, psychological or economic in nature. According to the Inter Parliamentary Union (2021:2), these types of violence “clearly constitute a violation of human rights and fundamental freedoms”. This also includes the duty to guarantee women’s participation in political processes fully, without obstruction and in all security, as enshrined in a plethora of international instruments, which are the International Covenant on Civil and Political Rights, the Convention on the Elimination of All Forms of Discrimination against Women (CEDAW), the Beijing Platform for Action and the Sustainable Development Goals (SDGs).

Furthermore, it should be noted that women in politics are affected by sexism, which, in many cases, is influenced by the wider stereotype which believes that women “are not made for” or “should not meddle in” politics (Inter Parliamentary Union,2021). This therefore, subsequently deters women from wishing to go into politics.

What is the situation in Africa?

As women’s political activity has grown in Africa over the past two decades, so has the frequency and degree of violent responses to their presence in politics, which continues to restrict their political participation. Literature is awash with evidence which recognises that gender based violence, in particular, violence against women, constitutes one of the biggest obstacles to women’s participation in decision-making. This violence severely limits women’s ability to participate in economic and social activities. It is to be understood that this violence against women is being committed in Africa where a majority of African countries are signatory to the international and regional human rights frameworks for women’s rights, e.g., the Maputo Protocol. Male counterparts are the main perpetrators, especially those from rival parties. A recent study by the Inter-Parliamentary Union (2021) and the African Parliamentary Union has found that African parliaments are not safe for women. 137 African women parliamentarians participated in the study and they represented North, Central, East, Southern and West African continents (See Figure II) 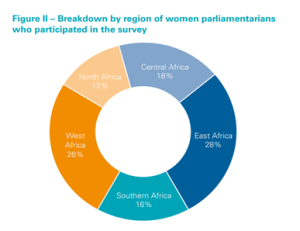 The study’s key findings indicate that;

If we are to compare the extent of the problem and in comparison with global and European data, findings (see Table I) clearly reveal that the problem is the same or similar as percentages on psychological violence across Africa, Europe and the world is all 80% and above. This is also the same if one looks at sexual violence, physical violence and economic violence which also have similar to no different results across Africa, Europe and the Word. This data clearly shows a worrying trend of violence against elected women parliamentarians. 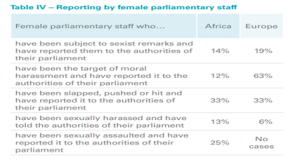 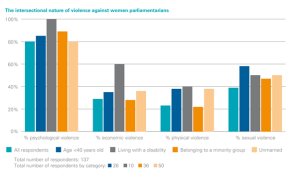 What are the legislative mechanisms that are available to deter the scourge of abuse of women in African parliaments?

One would think that there are no legislative mechanisms that are available to deter the scourge of abuse of women in parliaments from their male counter parts but this is not true, as a number of laws have been passed by different African parliaments to protect women from abuse. It should be clear that most African parliaments do have strong laws which are designed to address all forms of violence against women, including violence in politics and gender-based harassment, and violence against women in parliament. For instance, the World Bank (2021) data reports that 33 African countries have a law on violence against women, gender-based violence or domestic violence, and 30 countries have laws governing sexual harassment in the workplace. With laws in place to protect women from abuse, the challenge lies in lack of enforcement of these laws. Parliaments, as the prime legislative institutions of States, are well placed to fortify these existing laws to deter the abuse of women. In cases where these laws are weak, it is the duty of Parliament to enact new laws that are water-tight to end violence against women in politics. It is the duty of African Parliaments to make sure that they enforce the existing laws and strongly ensure that all these laws are implemented. According to the Inter Parliamentary Union (2021), some of the legislative reforms that can be championed by African Parliaments in order to deter the abuse of women parliamentarians include:

With these existing legislative frameworks, it is also prudent that these laws on violence against women, including in politics, be applied to parliament and parliamentarians, as it does to society as a whole.

What can Parliament do?

Parliaments in Africa have a crucial role to play in fighting violence against women. The violence against women that has taken place in a number of African Parliaments, such as South Africa, Zimbabwe, Kenya, etc. it is evident that MPs are those who, to a great extent, are in need of education concerning the awareness and prevention of gender-based violence (GBV). As perpetrators of GBV are resident in most parliaments in Africa, as revealed by IPU study findings, it is important that, African Parliaments ensure that all parliamentarians are taken through gender awareness and sensitisation programmes. Parliamentarians must be educated on this important matter so that they can be well-informed before they develop policies and rules on how to deal with such issues. Furthermore, parliaments should further go to ensure that any parliamentarian, despite economic, social or political standing, who is implicated in any act of gender-based violence should no longer enjoy any special status or security because of his or her mandate. Parliamentary immunities should not be used to protect those who should be prosecuted for abuse and parliament should allow justice to take its course.

With regard to the abuse of women parliamentary staff, parliaments in Africa should come up with a strong Human Resource policy that protects women staff from abuse. African parliaments should take a cue from the Ugandan and Sierra Leone parliaments that have a Human Resource policy manual and a gender policy for public servants, which contains information on what constitute sexual harassment, outlining precise examples of episodes from the “physical (unwelcome physical contact to sexual assault), to the verbal (sexual advances, sexual jokes) or non-verbal (sexually suggestive gestures)” (Parliament of Uganda, 2019).  Also, the manual gives details for the punishment of any person found guilty of sexual harassment, be it duty officers, parliamentary clients, casual workers, contractors, or visitors. The existence of these manuals are important in addressing the abuse of women parliamentary staff and parliamentarians and if all African Parliaments have such manuals and policies, it will make the fight against women abuse much easier.

What is the role of men and political parties in deterring the abuse of women?

Male parliamentarians, as the chief culprits of women abuse in parliament, have a critical role to play in deterring abuse through showing solidarity with women and in defending the cause of equality between women and men. Male parliamentarians also have a role to play in ensuring that they promote and champion zero tolerance of sexism and violence against women in parliament. They should use their influence to raise awareness of the problem to their fellow counterparts. Furthermore, they have a role to play in participating in training that will make them appreciate and distinguish these unfitting acts to become more aware of different abusive behaviour. Having undergone this training, the Inter Parliamentary Union (2021:24) argues that male parliamentarians will be able to “respond instantly, support the victims, talk to their male colleagues who are perpetrators of violence and report them if necessary, break the silence, take a stand against such behaviour in parliament and in the media, and thus set an example of good behaviour”. It is therefore critical that male parliamentarians be in the forefront and take up the struggle to stop violence against women parliamentarians and staff and have the battle cascade down to the whole society.

Violence against women parliamentarians is on the rise in most African parliaments and the main perpetrators of this violence are their male counterparts. Study findings have indicated that 80% of African women parliamentarians have experienced psychological violence in parliament, 67% have been subject to sexist behaviour or remarks and 42% have received death threats, rape threats, or threats of beating or abduction. The paper articulated how violence is a major push-away for women and how the political environment is not conducive for more women to enter the space. Institutions, such as the parliament, have a role to play in addressing violence against women parliamentarians, such as not allowing parliamentary immunities to protect those who should be prosecuted for abuse and parliament should allow justice to take its course. Furthermore, male parliamentarians need also to ensuring that they promote and champion zero tolerance of sexism and violence against women in parliament and should use their influence to raise awareness of the problem to their fellow counterparts. Political parties should also craft a specific gender-based violence policy which will seek to ensure that the rights of female politicians are respected by all party members from the top to the bottom.

Inter Parliamentary Union (2016) Sexism, harassment and violence against women in parliaments in Africa. Available at: https://www.ipu.org/resources/publications/issue-briefs/2021-11/sexism-harassment-and-violence-against-women-in-parliaments-in-africa

United Nations General Assembly (1993). Declaration on the Elimination of Violence against Women. A/RES/48/104.

World Bank (2021). Women, Business and the Law., available at: https://wbl.banquemondiale.org/fr/wbl.