Weekly Africa Report with Dr. Kariuki on Voice of the Cape radio. 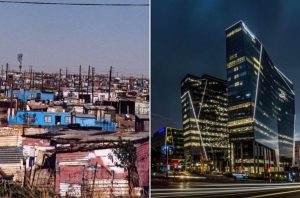 Once more, South Africa has climbed the global charts ladder to being the most unequal country in the world on a dismal economic measurement. According to the World Bank’s global poverty database in March 2022, South Africa thirty years into its democracy still managed among 164 countries in the Southern African Customs Union to be ranked the most unequal country in the world. Many key factors such as race (ethnicity contributing to 41% in income inequality and 30% in education), unequal distribution of land, gender, and politics. Concerning as it may, it sheds some light in explaining and understanding a shedload of societal issues including “high levels of civil unrest, a sky-high unemployment rate, rampant crime, and a population that is far hungrier, sicker, and poorly educated than it has ever been” as said by Ed Stoddard. Why is the economy of South Africa collapsing? Is the South African government failing in its affairs of duty?

The Gini coefficient of consumption per capita report places ANC as the ruling party as a push factor of all these social issues with three decades of its misrule and poor governance. The ANC from 1994 and the enaction of democracy in South Africa has failed to rectify the hereditaments of colonialism and apartheid rooted in special and racial segregation. The disparities of land ownership, the inequality of opportunity (providing proper and competent public schools with literate educators), and inefficient poor public service delivery are a few of the many issues the ANC has failed in rectifying. 10% of the population in South Africa owns 80% of the country’s wealth, leaving the majority of citizens living below the poverty line. The bottom 60% of households are reliant on social grants more than income from the labour market.

The South African labour market is heavily racialised and gender biased. The labour market in accordance with the Gini coefficient of consumption per capita contributes an overall of 74.2% of income inequality. Women workers earn approximately 30% less on average than male workers with equivalent levels of education. On top of having the worst employment outcomes, white people in South Africa earn substantially higher wages than all other races in South Africa. Black Africans are paid the lowest wages when they are employed. 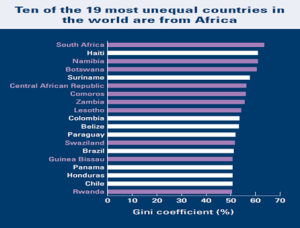 To put things into perspective, in 2011 and 2015 the average income amongst employed black Africans was R6899, for coloureds/Indians/Asians it was R9339, and for white people it was R24 646, three times higher than that of a black person. Furthermore,

South Africa experiences an unequal distribution of agricultural land. 72% of farms and agricultural land are still owned by white people and only 4% is held by black people. This among many things is due to the failure of the ANC to redirect and take the land back to its people. Why has the reality of land redistribution in South Africa failed even with the clear constitutional and political mandate for change? The South African government has had no transparency regarding the state’s redistribution programme. Information surrounding land reform beneficiaries and the policies governing the allocation of land are vague and rarely published. The State Lease and Disposal Policy is the most recent land distribution policy that took effect in 2013. In 2020, about 544 people benefited from that policy (male beneficiaries receiving 82% of the allocated land and females only 17.2%). Moreover, the SLLDP only gives beneficiaries leases for redistributed land, instead of full ownership.

The democratic agenda of 1994 promoted the development of economic and social rights, and an inclusive society, of which the benefits of these rights is still difficult to acquire for millions of South Africans especially those at the bottom of the societal and economic hierarchy like black Africans. The ANC presiding over a democracy that is failing over 30.4 million people living in poverty in South Africa. 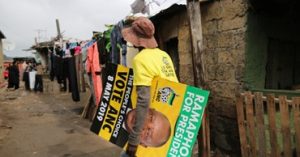 Nearly a quarter of municipalities are bankrupt and most state-owned entities are struggling due to bad governance. For instance, billions of rands were stolen from the 2020 Covid-19 relief funds through suspicious procurement practises. Although, the World Bank report suggests: